Untreated algae not only steals the fun out of swimming, it can be severely toxic to you, your family and pets. Pool algae blocks proper filtration, ruins liners and destroys expensive pool equipment.

GreenCleanMAX© makes pool algae removal so easy! Gone are the days of risking harsh and potentially toxic chemicals just to enjoy the pleasure of your pool.

Before GC-MAX our only option to remove stubborn pool algae was steady and repeat doses of copper which I avoided after reading the CDC report on copper back in '04. When you apply the GC-MAX you can watch floating dead algae rise right up from the bottom within minutes. This product is the only Organic Materials Review Institute certified and EPA approved peroxygen algaecide on the market. It's organic, biodegradable & won't leave harmful byproducts. Makes a great addition to our arsenal!

Tough on Algae yet Safe for People, Pet’s & the Environment

Look at what GreenCleanMAX can do for Your Pool
[/full_width_section]

[/one_whole]
What are You Waiting For?
Dive in & Try GreenCleanMAX Today!

The five Most Common Types of Pool Algae: 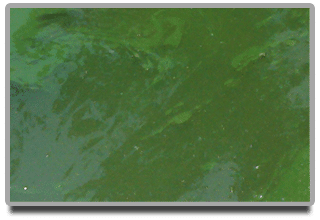 Planktonic algae is probably the most common type of pool algae most prevalent across the world. Plantonic algae grows quickly and can turn your clear water into ‘pea soup’ in a matter of days. This type of algae starts out as a green tint and eventually turns your water to a dark rich green. Like other algae’s, its growth is driven by excess fuels such as ammonia, nitrates and phosphates. This micro plankton clogs filters, gets into every crevice and is extremely resilient. 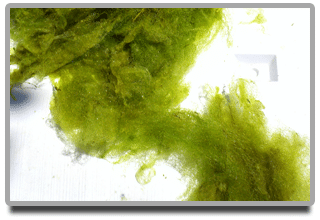 Filamentous algae is a common problem pool owners face yearly where the liner, ladder, filter and other pool components become covered with a slimy soft coating, dark to bright green in appearance. This type of algae generally sticks to whatever it can and becomes resistant to chlorine over time. Eradication is somewhat easier that with more persistent strains however, Filamentous pool algae tends to return out of nowhere regardless of temperature or time of year. Some homeowners have even reported Filamentous algae growing through the ice! 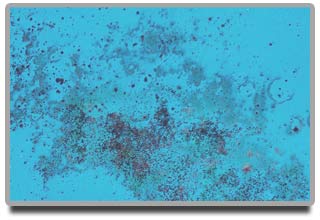 Black algae is another stubborn strain of growth that can appear in even the best cared for and pristine pool. As another highly resistant to chlorine type, black algae grows on the walls and bottom areas appearing as dark patches or spots. This unique strain forms layer-upon-layer to guard sub-layers making treating this infestation all the more difficult. Black algae is found in all states throughout the growing season and resembles the indoor strains found is basements or in restrooms around grout and joint crevices. 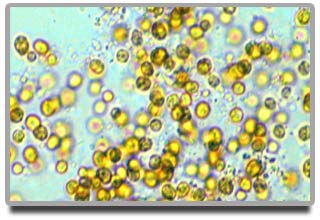 Mustard algae more commonly called “yellow algae” is mostly found in the deeper parts of your pool or where the sun does not penetrate well. Yellow algae appears as specks that resemble grains of sand, grouped together to look like ‘dirt’ stuck to the walls or bottom of the pool. While yellow algae is usually more prevalent in warmer climate states, it does appear in cooler climates during summer months. Yellow algae is virtually immune to most chlorine treatments but luckily, this type of algae does not normally ‘tint’ your water as other algae species do. 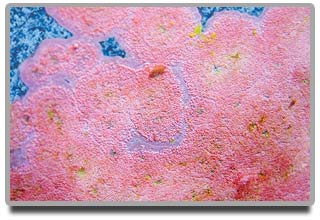 Pink Algae, also known as “pink slime” is an algae and not really a form of algae. This infestation is actually a living animal organism and appears as a pink slime which is generally resilient to common chlorine and some other over the counter treatments. Pink algae forms in small grouping and later takes over most all pool components having a slick to the touch feel. As with other algae’s the longer this algae is left unattended, the worse it gets. Fuels making up your water chemistry also play a major role in the proliferation of the invader.
GreenClean Stops Algae Once and For All!

Did you know? Pool algae is a living, breathing miniature organism. It is true! Algae is alive and contains chlorophyll which it uses along with sunlight to grow and eventually takeover your entire pool. Once alive and present, algae growth explodes rapidly and persistently making removal difficult. Generally, this infestation can be kept at bay so long as you avoid encouraging algae growth. The best way to defeat algae is to make your pool water less ‘algae friendly’ by knowing what attracts algae in the first place. This guide below will give you a good start to defending against an algae invasion and achieve total pool algae control!

Decreased sunlight – too much shade

What is the Real Secret to Spa and Pool Algae Control?

What’s better than a nice dip in a cool pool on a sweltering hot day! Swimming is one of the most refreshing pleasures imaginable and there isn’t anything quite like it when you are looking to relax and just let go. Pools have provided hundreds of millions of people around the globe some of the most pleasing and relaxing experiences, but as with anything that good, there’s bound to be some drawbacks.

So what can go wrong with such a heavenly pastime? Well, for most pool owners the number one problem each year is persistent and relentless algae! Algae seems to have a mind of it’s own and can be relentless, making it very difficult to completely control. Since the invent of swimming pools and spas, algae has plagued countless homeowner across the globe. Most spend endless hours cleaning, prepping and vacuuming every speck of dirt from their pool only to watch as the algae reappears within days. Pool algae control can be a living nightmare! At first, algae starts out as a slight green tint and eventually coats all surfaces with a slimy green coating.

Maintaining pools water can be a chore as we need to treat our water not only to maintain a healthy appearance, but also for sanitation purposes. Pool water needs to be kept in ‘balance’ so that your pools ecosystem does not work against you by helping algae grow and corroding your precious and expensive pool components. Sanitation includes killing bad bacteria that is normally found in un-sanitized water that has been sitting for a while. It is critical to include some typo of method which will keep harmful bacteria ( also known as pathogens ) to a minimal or nonexistent state. For decades, chlorine was used to keep sanitation in check until alternate methods such as ozone generators and other methods of sanitation caught on as a viable alternative to potentially harmful chlorine. 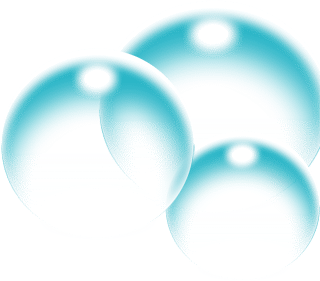 As algae has a tendency to become resistant to chlorine and other ‘daily’ treatments, removal and control becomes difficult if not near impossible without the proper tools in hand. Many consumers resort to extreme doses of chlorine or other chemicals using a technique commonly known as ‘shocking’ your water. Shocking a pool more or less overloads your water so heavily with chemicals that if all goes well, the overdose kills off the algae and your pool water begins looking clearer within a few days.

With more than 48 types of common pool algae, certain treatments react differently depending on which method of ‘shock removal’ you utilize. Your pool may be infested with small green micro algae known as the ‘planktonic’ type or you may see thicker clumps which bind to the walls and other surfaces. Keeping algae to a minimum is usually achieved to some degree with chlorine, but as most people have come to realize, removing algae with chlorine is becoming a dated practice and it is not always easily removed due to algae’s ability to develop chlorine resistance.

Sunlight, oils, lotions, cosmetics, perspiration, sunscreens, hair, urine, debris and other organics blowing into your pool such as rainwater, dust, bugs, leaves and grass, all contribute to pool algae growth. While your filter is working hard to keep these stimulators in check, algae does have a mind of its own and does not require huge amounts of ‘fuels’ to grow and multiply. Also, filters tend to collect oils and other contaminates and must be cleaned and replaced frequently to maximize their controlling capability. It is a fact that even the best filters found in ultra-high end spas and pools become clogged as with any other type and require regular routine maintenance, just as their less exclusive residential counterparts.

Some homeowners have desperately resorted to treating their water for algae by applying various doses of copper sulfate. Many of those pool owners using such products have also experienced the visible after-effects such as ‘copper stain’ along with the usual bleaching effects on vinyl coatings and other pool accessories caused by too much chlorine. This method is NOT the best way to achieve pool algae control.

Copper stain removal kits sometimes work to remove embedded stains but there is little that can be done to bring the color back to a bleached out vinyl liner. One the color is out, it’s out – unfortunately. Copper is also a corrosive and over time will work to deteriorate cement structures and metal components. While copper may kill pool algae until a resistance point is developed, studies show that certain levels of copper may not provide sanitation allowing certain pathogenic bacteria to survive in the water body.

Removing pathogenic bacteria from your pool will require a daily sanitizer method such as the use of ozone, salt systems or chlorine as these methods have been proven to keep bad bacteria in check. However, removing stubborn algae can be easier and less risky using the right approach which includes digesting and breaking down organics throughout the year and utilizing a safe, fast acting algae killer as needed. Enzymes are the latest technology used to safely breakdown organics into harmless byproducts, removing them from your water through standard filtration. Enzymes speed up the organic breakdown leaving less time for these ‘fuels’ to feed pool issues and quickly help to clarify the water helping to create a more pristine condition which is highly desirable to most pool owners. You see, complete pool algae control can be attained when you know how to fight back!

Removing algae without the use of heavy chemical shocks can be achieved with Green Clean MAX products. Green Clean MAX helps homeowners avoid high doses of chlorine or copper sulfate by providing superior algae control without the potential effects of harsh chemicals. Green Clean Max contains stabilized hydrogen peroxide, known as sodium percarbonate, which decomposes rapidly in water. GreenClean MAX is an excellent alternative to dated treatments such as copper and chlorine used to shock treat algae infestations and is the newest technology to help homeowners regain control of their pool water.

Your best approach to tackle pool algae removal is to start early in the year. For algae growth and the persistent yearlong strains, apply GreenClean MAX as needed and keep your water cleansed and clear using a potent enzyme based organic digester. These methods along with daily maintenance will help guarantee a stress free, lighter maintenance season which means more time for you and your family to enjoy your ‘algae free’ swimming pool.